One of the cool things about staying at the Embassy Suites was the free hot breakfast buffet every morning. Score! They also have a free cocktail hour, but we missed that because of the festival. I had some serious reservations about turning down cocktail hour two days in a row, but you do what you gotta do…

First thing’s first: liquor store. After we realized that we can basically walk into the grounds with a keg, we weren’t going to pass up the opp to drink on the cheap. I went in halfsies with Lorelai for a case of Purple Haze and pint of Firefly. Good place to start.

But lo! We get to the bag checking line and some are taking their job way too seriously. Mostly the women. So the girls who couldn’t go through just went around to another line, batted their eyelashes at the dapper young gentlemen, and in we went with our contraband. Thank you, Jazzfest. If one line fails, try another!

we bonded over our mutual distaste for bud light

The gang was excited about Tom Petty closing that night, and I was indifferent. The crowd for Petty was INSANITY. We tried to get a spot early, but people were getting walked on, heads got slammed with cases of beer, toes were crushed, and teeth were gnashed. Not for me of course. I was sitting on top of my unicorn, watching with a smug smile.

But eventually I got bored and bailed for the Seahorse. I wanted a beer, a bathroom, and a seat. Plus, I don’t know Tom Petty’s music well enough to care about his show. <Gasp>

On my way I found $100 in the parking lot! Okay not really. But I did get a seat and an Abita Strawberry, and discovered the amazing Eryn Shewell whose voice drips like butter and makes me want to cry. I could not take my eyes off of her. She did a version of At Last by the lovely Etta James that gave me goose bumps for at least 10 minutes. Increible. Please look her up.

Eryn Shewell…funky way to spell Erin, but we forgive her because her voice…OMG

Eventually the guys come round and we continue with our new tradition of the Jazzfest after party at the Seahorse, before moving uptown for The Maple Leaf – a music venue 2 locals told us cannot be missed.

It was there we met our new friends Lon and Blaine from Virginia. I did the whole “Blaine? His name is Blaine?!” But he had never seen Pretty in Pink so that was a waste of a good movie quote. I poured one out for John Hughes. In my mouth.

When you skip dinner, oysters on the street are a lovely secondary option. Or visiting Fuddruckers inside Harrah’s at 3am (hanging head in shame) 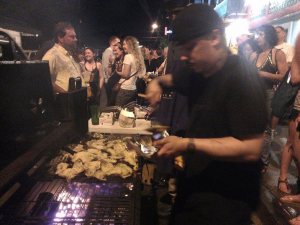 The Maple Leaf = slow clap. The music was fantastic and the venue is an old New Orleans building that has live music 7 nights a week, and Bruce Springsteen and Bonnie Raitt have been known to just “pop” in for a quick jam session with the local musicians.

I’d be lying if I said we didn’t have our eyes peeled for ol’ Stamos, hoping he’d make an appearance in uptown. He was spotted at the Petty concert in the VIP tent, but continues to remain at large.