Remember the lovely Quebecoise girls we met in San Sebastian? Well, turns out Gab’s parents own a restaurant in Sherbrooke, about 1.5 hours from Montreal. I promised her I would go (she wouldn’t be back by then) and once I told Cheyne about it, he was game. What a small world, huh? So we gathered up Duncan and Emilie and headed that way. About halfway into the journey, we were going to run out of gas, so Duncan exited and took a detour that led us through the untouched backcountry of Quebec. You better believe we had the windows down and were blasting Celine Dion. I heard SO MUCH Celine Dion on that trip. Sigh. We finally stumble upon a shabby gas station to which Cheyne pops out of the car to ask directions. After filling up, we are back on track and arrive at Le Chou de Bruxelles on that dark and stormy night.

We all settle on the four-course prix fixed menu. The appetizers offered some interesting choices, and as we were deciding, the conversation went something like this:

Cheyne: Mmhmm, sweetbreads. I’ll get that.

Then there was a pause as I realized he had no idea what sweetbreads were. I pondered telling him at all. The devil on my right shoulder said to keep my mouth shut, what a hilarious adventure this would be! The angel on my left shoulder softly reminded me that this was my friend, and if I knew he was going astray, I should lead him back. It was a toss-up and the hamster wheel was cranking. In the end, I decided to not ruin his meal.

Erin (after a few moments): You know what that is right? Intestines. The thymus gland of an animal.

Cheyne: (aghast) Well isn’t that a wolf in sheep’s clothing!

In the end, he ordered them anyway. Cheers to him. Life is all about trying new things. I even had a few bites. And we managed to get through quite a bit of the plate before our minds took over and reminded us of what we were actually eating. It was then that we politely pushed the plate away.

It was here at this restaurant that I was able to use my newfound French phrase “tir bouchon s’il vous plait, beau garcon”. Worked like a charm. We SO got those wine bottles opened.

It was actually Gab’s brother who waited on us, so everyone (except me) had a grand time conversing with him and laughing in their all-knowing French ways. They were so smug.

Believe me, this is not some shameless plug for Le Chou de Bruxelles – trust me with complete sincerity that this had to have been one of the best meals in my entire life. And my dining companions agree. Even the salad was extraordinary! I don’t know how one can make a salad so deliciously delectable, but they did. The only explanation is crack. Crack always does this to me.

We kind of felt like royalty, having so many courses. They even brought out lime sorbet in the middle to cleanse our palates! It was kind of a big deal.

In true food blog failure, I forgot what exactly I ordered. But I think it was lamb. I was too busy eating to be honest. 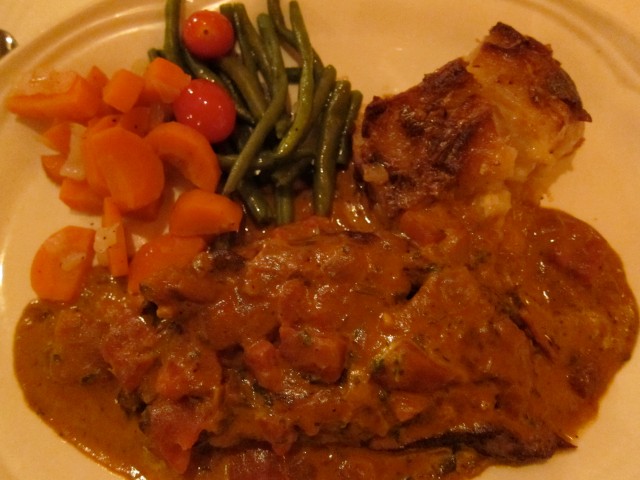 Cheyne went for the mussels from Brussels. Did you know that you were supposed to use the shell as your mussel fork??? We learned that that night. Education is delicious.

For dessert, Olivier offered to make us a special plate of small portions of everything they had on the menu. Sold. It was only when he came out with 2 plates and placed one in front of me, one in front of Emilie, that we realized with a bit of trepidation that they made these “small portions” for every single person at the table. Oh holy Jesus. 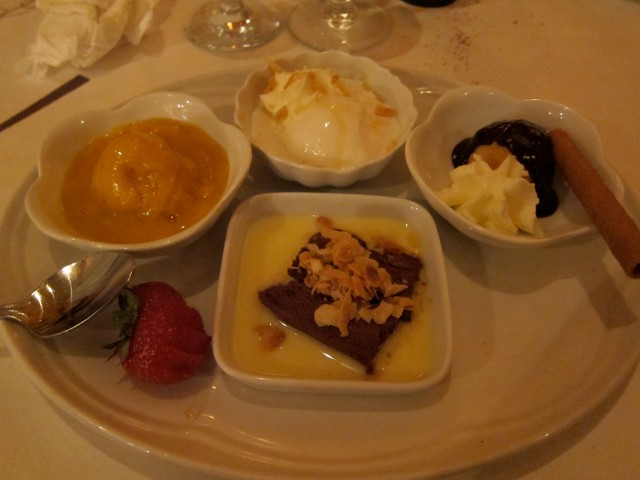 We were there for 4 hours!!! We definitely were the last ones there, finishing off our 3 (0r was it 4?) bottles of wine. Did I mention it’s BYOB with no corkage fee? Holla! Please please please….I implore you – if you are in the Montreal/Sherbrooke area, you MUST go to Le Chou de Bruxelles. It’s the loveliest dining experience you will ever have. And ask for Gabrielle or Olivier to serve you and tell ‘em I sent ya 🙂