Tulum on a Shoestring

After being quarantined for a couple of days in our tropical prison, we decided to sneak away for a day and visit Tulum.

Tulum first struck my fancy in 2006 when a very influential friend described its magic to me. Yes, I can catalog most of my interests by year. Tulum then made it to the top of the list for Mexico.

So after breakfast that morning, (if you can call it that) we grab our money and head out the door before anyone can stop us. We take a $6 cab ride from the resort to the main highway (about 4 minutes of driving, so major rip) and he dumps us off. We run like mad across the lanes, avoiding the drivers going about 90 mph. And then we wait for the colectivo. All we had to do was stand on the side of the highway and flag one down. Easy, right?

We caught one in about 15 minutes and handed over our centavos. In order to get to my seat I had to climb over an incredibly rotund Mexican man, subsequently rubbing questionable body parts over his portruding tortilla belly. It was about a 2 minute process. In hindsight I should have just sat on his lap. Next time.

We pass through Playa del Carmen, then Tulum, and get dropped off on the side of the highway again, told that “las ruinas estan alla” while our driver and multiple passengers pointed to the other side of the road. We hop out and mosey on over to a hotel/restaurant/bike rental/internet/lavanderia/anything else you can possibly want in one location shop.

Tulum turned out to be a bit of a disappointment to be honest. The “city” of ruins is completely roped off, so that all you are allowed to do is gaze in amazement from a distance at what is left standing. And it is amazing, but I really wanted to get in there and get my hands dirty. I did the Inca Trail in 2006 (please note the year) and when we reached Machu Picchu we were able to scramble along the ruins and walk through any hidden crevice that we wanted. That tactile exposure is what makes it real. Since Raul and I are huge history nerds we totally loved Tulum, but it would have been nice to really get in there and look around, feel things with my hands, and smell the ancient, damp smells. Sigh. So I was only able to capture the essence from afar.

Then we saw this…. 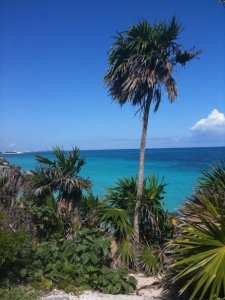 ummmmm. Get me in that water, now.

But we had to go here instead: done.

Leaving in such a hurry in the morning caused several amateur mistakes. One, we forgot our swimsuits and towels. So I took off my shirt and swam in my bra and shorts. Then had to stand in the sun and let it dry the water into little salt crystals on my skin. When in Rome…
Second, upon closer inspection of our funds, we realized we were much, much shorter than we thought. Panic set in when we realized that neither one of us had brought our cards. So there we were, dumping out every last coin, and counting what pesos we had left. 220. So, there went our dreams of having a delicious Mexican meal and countless beers on the playa. We still had to make it back to the resort on chump change.

We splash around in the jewel toned waters of Tulum a bit more, then hop back on our bikes and cycle around el pueblo. Since we can’t give up the opportunity of a meal outside of prison, we decide we will each have one beer, and split a plate.

We find a charming little hole in the wall close to the main road and settle ourselves down. Sol for me, Pacifico for Raul, we salivate at the prospect of having a beer that isn’t watered down OR smell like wet dog. They were served to us in the bottle! That means it’s real.

We opt for one order of fajitas and gobble it down as if we hadn’t eaten in weeks. Oh sweet succulent morsels.  We pay the 120 peso tab and watch as half of our money disappears. Using the rest of our dinero, we hop a bus back to Tulum which drops us off right at the turning point for the resort. We battle a few dinosaur sized mosquitos for 20 minutes, then flag down a cab to take us back to Ocean Coral, and we promptly return to our cell, ahem – room, with Greased Lightning playing in the background.

4 Responses to Tulum on a Shoestring